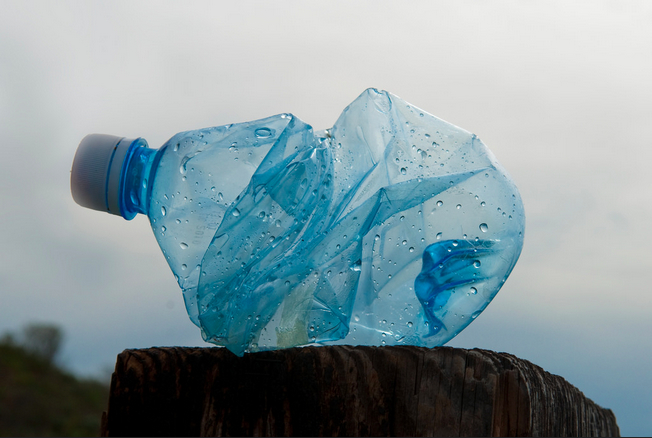 The Anthropocene is characterized by when human activities became the dominant global force on Earth’s geology and ecosystems, often irreversibly changing the environment. Plastic water bottles and the development of the plastic water bottle industry have been leaving an inerasable mark on the Earth as well. The idea of bottling water developed in the 1970s after a transition in the market away from soft drinks. The plastics used in bottled water are petroleum-based and contain chemicals that leach into marine and terrestrial ecosystems when the bottles are used by millions of consumers and not properly recycled. Not only is the plastic of the bottles extremely harmful to human health and the environment due to the wasteful nature of this product, the water itself is often withdrawn from public water sources by industry corporations and resold to consumers with labels like ‘pure spring source’ etc. Now, the industry reflects the thoughtless choices humans have been making in regards to their environmental and ecologically impact. Plastic water bottles are illustrative of the Anthropocene because of their wastefulness, the undesirable consequences of human exploitation of natural water resources, as well as the harmful pollutants associated with plastic bottles that are certainly having permanent, lasting impacts on the Earth and it’s ecosystems.

The plastic water bottle industry began to develop in the 1970s after the soft drink industry began to decline. Once health experts and consumers became aware of the unhealthy nature of sodas and flavored drinks, bottled water became the new hot commodity of the beverage industry. When the Perrier beverage company launched a successful advertisement campaign in 1977, most other corporations followed suit. Companies such as Dasani and Nestlé then began to market water bottled and packaged in harmful plastics as “healthier” alternatives to sodas and sugary drinks. This is still prevalent today as exemplified with Aquafina’s “For Happy Bodies” campaign, designed to attract consumers to the healthy beverage choice of bottled water. But is this product healthy for the planet? Marketing water this way was a capitalist tactic to supplement profit decline, which ultimately led to the increase in the plastic production, consumption, and waste that has resulted in permanent harm to the Earth. In addition to marketing bottled water as a healthy choice, companies also began to market the idea as a natural product, direct from spring and mountain sources. While this definitely contributed to the success of the water bottle industry over many years due to the inherent attraction between humans and things associated with nature, there was often deceit in this strategy. Several bottled water companies including Nestlé have gotten into legal trouble over falsely advertising their water as ‘naturally spring sourced,’ when in fact it was bottled municipal tap water. Additionally, companies are pumping water from public aquifers or springs, bottling it, and reselling it back to consumers at exponentially higher prices.

This exploitation of natural water resources is one of the main negative environmental impacts the bottled water industry is having on the Earth. Local water springs are being tapped and depleted by corporations, leaving residents of exploited areas with lowered and often degraded water supply to depend on. This exemplifies an epoch defined by anthropogenic exploitation of natural resources for private profit. For example in the early 2000s, Fryeburg, Maine, a small town with clear, spring water supply became the center of conflict between locals and corporations. Poland Spring water, owned by Nestlé, attempted over five times to drill an aquifer well to siphon water to their constructed water-loading center and bottling location close by. After seeing how beverage companies are draining aquifers of local water all over the state of Maine, residents and the local government of Fryeburg have continued to legally fight the exploitation of their natural water resources due to the negative effects it could have on the water they have a right to protect. Creating an industry built on the practice of unsustainably exploiting local water resources takes advantage of both the Earth’s hydrogeological structures and the people that rely on these water sources.

Not only is the acquisition of the supposedly ‘naturally sourced’ water an unsustainable method of extraction that can permanently damage and empty aquifers beneath the ground, but the plastic bottles in which water is held are taking an immense toll on the environment, an impact that will be visible long after the Anthropocene ends. These bottles are associated with negative health and environmental effects due to the harmful nature of plastic chemicals and the manufacturing of plastics. Numerous research studies have been conducted on the effects of these plastic chemicals, and many have proven that Bisphenol-A, or BPA, a synthetic chemical used in the production of plastics, is an endocrine disruptor harmful to human health. Even low-dose exposure to BPA through chemical leaching from the plastic bottles into the water suggests an association with certain cancers, neurological problems, and reproductive issues. There has been multidistrict litigation and several lawsuits over the inclusion of Bisphenol-A leaching from plastic bottles into ingested products, including baby bottles and water bottles. This endocrine disruptor can also be a detriment to the environment by getting into aquatic ecosystems in trace amounts, causing harm to fish and other faunal water species. Another risk associated with the water bottle industry lies in the manufacturing of PET plastics. Polyethylene terephthalate, or PET, is the polymer of clear plastics used for bottled water. The production of this type of plastic requires the emission of exhausted gas, which very likely contains some of the harsh polymers and chemicals used in the production of PET plastics for water bottles. These chemicals are then released into the air damaging ecosystems and further putting local residents at risk of inhaling these carcinogens.

The anthropogenic causes of environmental change characteristic on the ‘Age of Man’ epoch are no better exemplified than with plastic pollution. Billions of plastic water bottles are thrown away into the garbage every year; many of them are littered, or fail to end up underground in a landfill. These plastic bottles then slowly degrade and break apart into tiny fragments of PET and other plastic polymers that may further dissolve in seawater. These microplastics are polluting the oceans and other water sources, and the petrochemicals of plastics become embedded in the Earth. This deposition of plastic will certainly be detectable within stratigraphic layers to geologists in the future. Furthermore, filter feeders such as zooplankton ingest the microplastics and larger marine animals can suffer the effects of chemicals perpetuating through trophic levels. The microplastics embedding in the sea floor or near coral reefs also can release toxic chemicals into the surrounding structures and water, degrading the precious seas. This plastic pollution exacerbated by the production and use of plastic water bottles may perhaps be considered one of the worst decisions that conscious consumers make in regard to environmental impact.

Water sealed in plastic bottles exemplifies the thoughtless and destructive relationship that many humans have with our planet. People would rather have a convenient, disposable container of, essentially, fancily packaged tap water, than access clean municipal water sources using a reusable, chemical free bottle. Many people either don’t have a greater understanding of the implications of plastic water bottle use, or don’t concern themselves with the environmental issues they are to blame for during the Anthropocene. This should teach people to reduce their consumption of plastic water bottles in the first place and rely on tap water supply, as municipal water resources in a reusable container have far less of a negative environmental impact than wasteful plastics. It is understood that some parts of the world lack access to clean, secure water sources and foreign or domestic aid may rely on the use of plastic water bottles, but that is an issue of human rights taking priority over environmental concern. For the majority of the world, however, municipal water sources offer a cleaner, more sustainable option than the use of plastic bottles that exhibit the lack of environmental concern often characteristic of the Anthropocene. The undesirable consequences of water resource exploitation and the production, consumption, and pollution of plastic bottles are taking an immense toll on the Earth and it’s ecosystems.