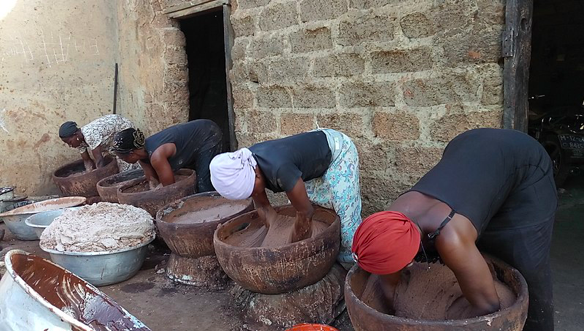 “Shea is women’s wealth…shea is women’s wisdom. Confide in it before speaking to your husband…This shea has stayed with the village, has given it all its riches and protection.” This is part of a song sung by shea butter makers in Mali, proving how the resource is integral in both their gendered identities and livelihoods. Shea butter is a fascinating commodity in both how it is made and its origins as a consumer good, its history implicated in both the Capitalocene and Racial Anthropocene. In the 19th century, the British colonial era specifically, exploration premised on Eurocentric ideology affected how indigenous peoples were viewed and how their local economies and knowledge were used for further profiteering. Procedures such as mapping of land, research, promotion of labor gangs, processing teams, and mechanized methods were implemented to further these extractive pursuits during the colonial era. The shea plant itself is native to and entirely dependent on the savanna clime, grows wild, and is resistant to plantation cultivation. The only way to harvest its produce is to physically locate production to where the trees grow and to obtain traditional knowledge of its harvest. Through its intensified commodification, the value of lives and resources were diminished in return for larger profit gains. Thus shea butter is important in revealing how European colonial exploitation of land and people led to environmental degradation and unevenness in wealth and economic prosperity.

Shea processing is an extremely time consuming and specific process, the knowledge passed down through intergenerational chains of women. Historically the women of West Africa have had a multitude of uses for shea: In rural areas has been used for illumination, a source of edible oil, and applied topically as both a beauty aid and to combat skin damage from the arid conditions. Culturally it is important to women who are pregnant, where they use shea butter to smooth over their pregnant bellies and post-birth rub it on their newborns so their skin glows. During imperialist excursions by the British, there was a focus on capital gains that could be made by forcefully appropriating plants and resources indigenous to the lands they explored and inhabited. This era was thus a main factor in the Capitalocene, and within West Africa the focus on extracting and exporting shea on a large scale is representative of what Raj Patel and Jason Moore call the Capitalocene’s “seven cheap things.”

Shea is perfect in the “cheap things” context as Europeans observed its “…remarkable keeping property…,” and that in the context of soap it was used in “…cheap soaps to prevent their washing away too rapidly.” By shea being able to keep longer without spoiling, and properties that could hold together cheaply made soap, its methods of production were intensified to further cheapen soap prices. Due this intensification, the density of shea in Sudanian savanna was reduced from 230 to 11 hectares from 1940 to 2003. Local female economies were affected as well. Wet seasons are when shea harvest is at its best, but with traditional gender relations women are expected to aid with farm work instead. In some areas, wives are expected to pay for items such as schooling for their children, medical costs, and clothing . To afford such items, women participate in commercial activities such as shea production during the dry season for compensation. With the intensified commodification of shea, women work year-round solely on butter production and are unable to supplement their income. Additionally not paid fairly for the work they provide in comparison to the profit made, for example in 1995 shea butter selling in Europe for eighty four times the price that was paid to the women who did the work, they embody cheap labor. Due to the loss of supplemental income food and care must be cheap in order for women and their children to survive. The cheapening of shea not only affects women, where although shea grows naturally in only 18 countries, major shea producing countries are in fact some of the poorest in the world, demonstrating cheap money. Shea butter as a commodity is complicit in the Capitalocene, where the factors in its production have caused overall cheapening of lives and resources while profit is unevenly shared. This unevenness leads to pointing out another important facet of shea butter, which is how Eurocentrism within colonial pursuits led to the viewing of indigenous people as “other,” a key component to the Racial Anthropocene.

According to Laura Pulido, the Racial Anthropocene highlights racism as a precursor and force of capitalism that leads to uneven vulnerabilities. The history of shea butter production is predicated upon racism and has subjected people, mainly women of color, to inequalities in capital and livelihood. Racism in terms of shea butter processing can be seen through Eurocentric ideology. Eurocentrism is the belief that European peoples and their culture are superior to any other cultures. This belief was central to the colonial pursuits of Europeans, in which wherever they decided to inhabit land, Europeans believed it was their right to the natural resources present, and that any peoples considered “different” needed to be taught how to act like a European, done mainly through missionary work to attempt to convert indigenous peoples to European religion and culture, thus “civilizing” them. This can be seen in French colonial documents from Africa during colonization, in which the practice was to “…go abroad on these kind of mercantile speculations to make money alone…they have to make money honestly and creditably, to civilize savage men.” Through this line of thinking, Europeans concluded that they could make profit by utilizing indigenous peoples labor in the name of “civilizing savage men,” or in another context, making people adhere to a European way and ideology of life.

Due to these racist views of indigenous peoples, the traditions, local economy, and resources of the shea economy were appropriated and degraded. By focusing on European management of shea commodification, shea tree stands were rapidly deforested. French colonial advisors in 1914 attempted to conserve these trees to preserve their profit, and to do they imposed restrictions to prevent farmers from cutting down the trees in their private fields . This excludes local markets from participation in the market and thus from making a significant profit from their labor. The low prices offered by global markets for shea butter does not provide sufficient monetary incentive to producers to induce them to continue its production. Due to shea’s history of appropriation in markets and in nature by colonists, it has created unevenness within the categories of race, gender, and capital. Those who actually labor to produce the product are having to deal with the environmental degradation and poverty that has been left behind by entrepreneurial colonists.

Shea is a unique product due to its roots in gendered tradition and the nature of its growing conditions. Its properties making it desirable for commodification, European colonists paid little regard to the amount of resources and labor they used and thus their effect on the survival of locals. Due to the intensification of shea butter production, local women now live on even less money to support their families while performing arduous labor year-round. Colonists further created an unevenness in the shea butter trade when they chose who was “superior” in terms of culture and race, taking over lands and local economies for personal profit under the belief that it was only Europeans who were “able” enough to do so. This caused areas of shea butter production to have their local economies degraded, nature over exploited, and people subsequently impoverished. Shea butter is continually being added to more commodities, and this question remains; in striving for a more just and sustainable world, should we not focus on the local economies and traditions that surround the resources we use? Because if we don’t, not only is the earth at peril, but cultures and lives.